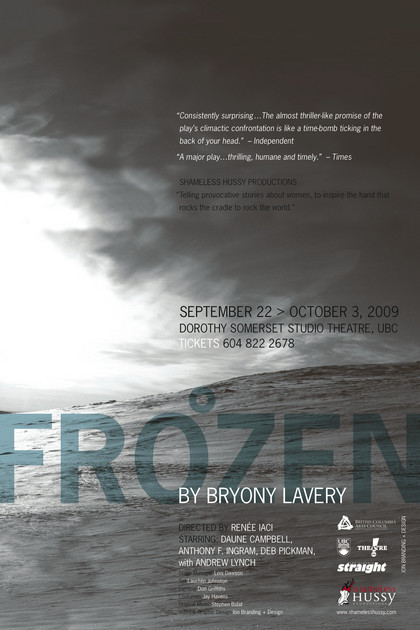 Her mother, Nancy, retreats into a state of frozen hope. Agnetha, an American academic, comes to England to research a thesis: "Serial Killing—A Forgivable Act?"Then there's Ralph, a loner who's looking for some distraction. Drawn together by horrific circumstances, these three embark on a long, dark journey which finally curves upward into the light. Angry, humane and compassionate, Frozen is an extraordinary play that entwines the lives of a murderer, the mother of one of his victims and his psychologist, to explore our capacity for forgiveness, remorse and change after an act that would seem to rule them out entirely.

One the UK’s busiest playwrights Bryony Lavery has penned over forty plays since 1976. She earned her reputation early with the company Female Trouble and as AD of Gay Sweatshop. Her extraordinary play Frozen received the UK's prestigious Barclay Award for Best New Play of 1998. Her latest work is an adaptation of Magdalen King-Hall's 1943 novel, The Life and Death of the Wicked Lady Skelton. A natural fit to author shameless hussy production’s first full length drama, Lavery is used to the assumption that her work is invariably heavyweight as well as feminist.

"[a] fine play…so concentrated and unflinching that at times it takes your breath away." - Observer

"Consistently surprising… the almost thriller-like promise of the play's climactic confrontation is like a time-bomb ticking in the back of your head." - Independent

This professional production was presented with the generous support of Theatre at UBC as an Extra Event in their 2009/10 Season of plays: www.theatre.ubc.ca